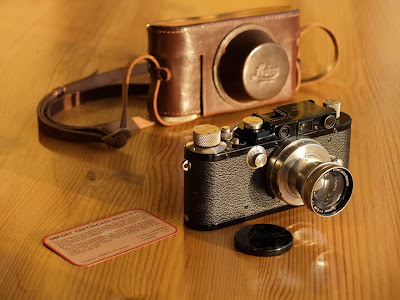 So what would you do with this camera ?

Although its not a particularly rare camera in anyway, it's just your usual run of the mill 1930's Leica, no gold plating on this one ! it's also not "brand new" like out of the box nor do I have the original box, but others have said it is in beautiful shape for its age, comments I have have received are "It looks like it came out of a time capsule". it shows some very minor wear here and there. I have had it recently CLA'd so it operates as good as it looks.

I recently picked up the little Leica III with nickel finish including the 50mm Summar lens and leather case, also included was a import card with serial numbers for both the lens and camera body from E. Leitz, London England dated 1936. I don't know a whole lot about the history of the camera, I bought it at a used camera store and was told that the camera had been brought in by the granddaughter of the original owner. I am intrigued to know who owned it and how did he keep in such good condition all these years? I was not looking for a shelf queen when I bought it, as I would rather put it to good use and make pictures with it but it was just so enticing and beautiful so I bought it. The little Leica is really a joy to use, despite using 1930's technology, I have had fun using it.

A good friend commented, that life is too short, that I should just use it and enjoy it. In my mind cameras are made to be used, although I can see why people want to collect them and put them behind a glass case or on the shelf, especially a beautifully built camera like the Leica or other well engineered cameras of the 20th century. Before I got the camera serviced I asked if I should have it worked on as some might think that it would have diminished value, in its "original" condition. The answer was pretty clear, get the camera serviced and use it. Someone suggested though that I should use it sparingly, do not use it daily because wearing off the finish does diminish "value". I thought that was an interesting answer, but then the question arises, so just how much do I use it ?, I would like to carry it around with me on a regular basis but then there is more of a chance of wearing off the nice finish.

No sense in leaving it at home I say, where it would get the most amount of protection, I may as well use and see what kind of pictures I can create with, as the saying goes your best pictures are the ones that come from the camera that you have with you.
Posted by Gary Nylander at 9:18 PM