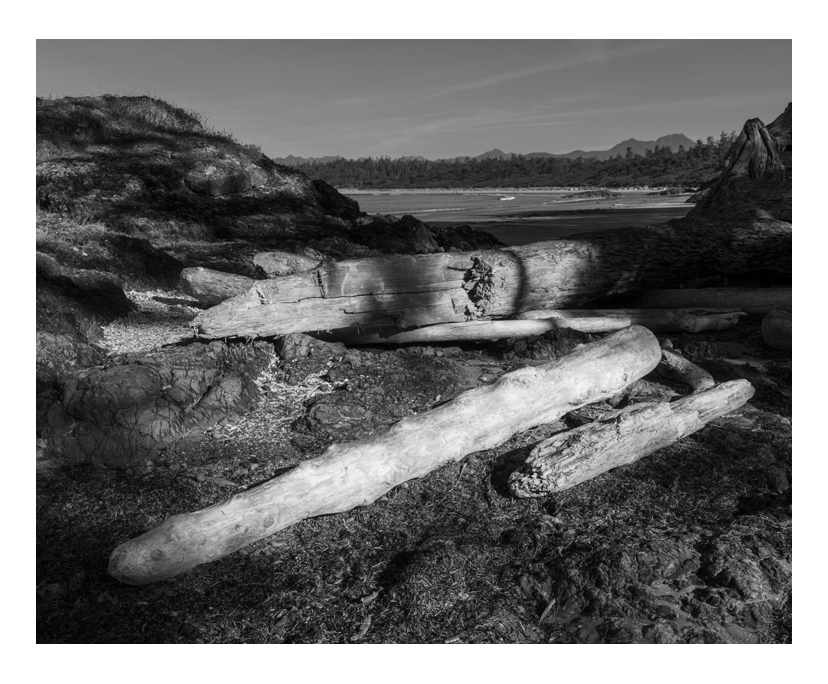 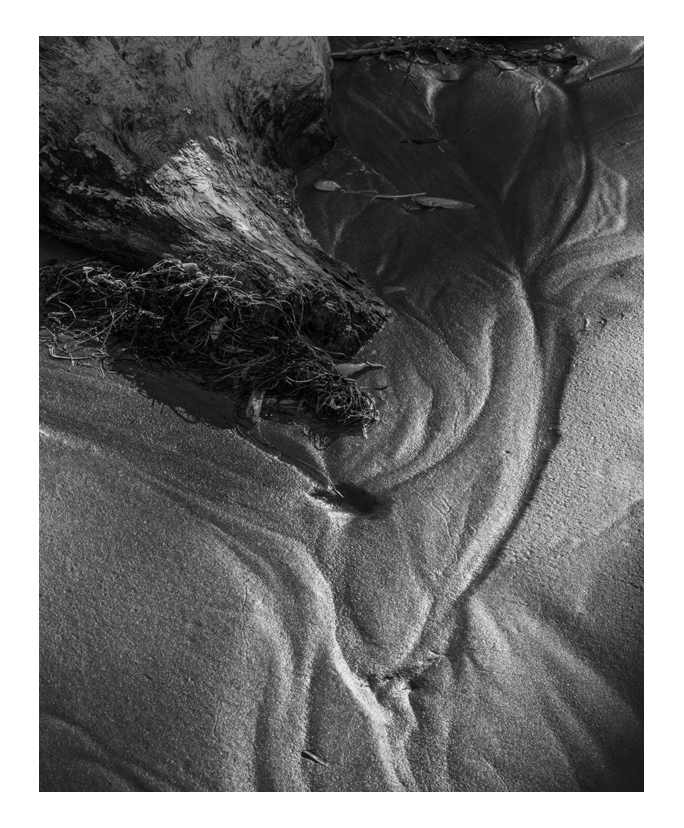 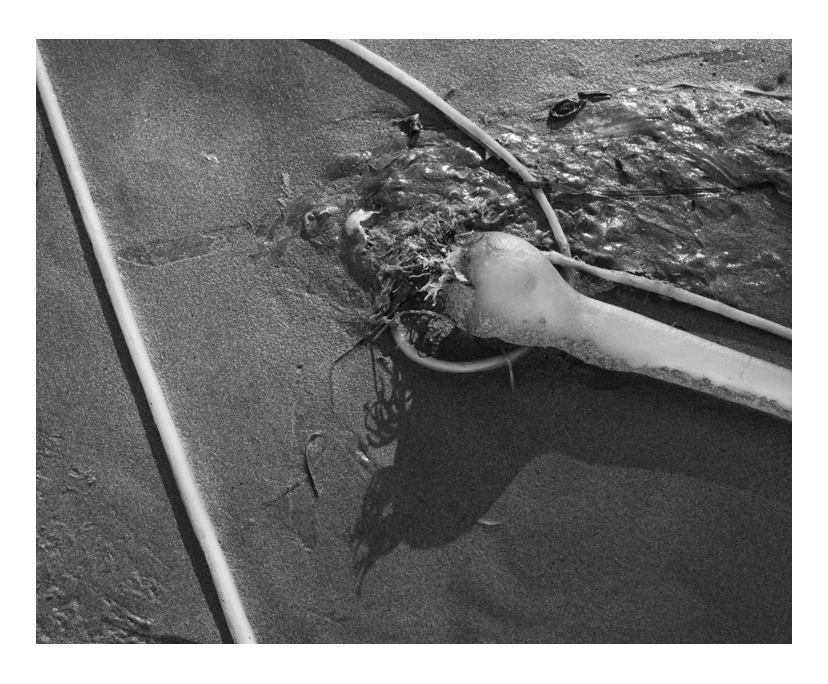 A camera fit for a Prince

I have never photographed Prince Philip, Duke of Edinburgh. However, I do own a Speed Graphic camera that once belonged to newspaper reporter and photographer, Alec Merriman (1920-2016) who used the camera to photograph the Prince. During Alec's years with the Victoria Times starting in 1951 and later the Times-Colonist until he retired in 1985, Alec photographed many events and dignitaries in the course of his career with the newspaper. One of those events was when Queen Elizabeth and Prince Philip visited Victoria in 1959, just one of the numerous trips to Victoria and the Island for the Royal couple.
I never met Alec, but I did end up with some of his old camera gear including a "baby" Speed Graphic from the 1940s. I came to know Mr. Merriman in spirit through his daughter and son-in-law, Barbara and Stew Lang after friends of mine from high school, Dave and Barb McIntyre linked me up with the Lang's. If the lens on that camera could somehow replay all the images that Alec made on that day the Queen and Prince visited it would be very interesting.

1.    Prince Philip, Duke of Edinburgh, left in a convertible car with Alec Merriman, top left, background. (Photo courtesy of the Lang family)
2.    Alec Merriman with his Speed Graphic. (Photo courtesy of the Lang family)
3.    "Baby" Speed Graphic with original handle flash that used flashbulbs. The camera lens has been overhauled with all the shutter speeds working. The flash has an LED light bulb with a built-in battery that works when a button is pushed on the back of the flash unit. (photo by Gary Nylander)
4.    "Baby" Speed Graphic with hand-made wooden handle. (photo by Gary Nylander)
5.    The type of film holders and film that was used in the camera, from left a Graflex "bag mag" that held 12 sheets of 2 1/4" x 3 1/4" film, each film sheet in a metal sheet called a septum was pulled out into a leather bag (replaced with new leather) and then stacked on top of the pile of 12 septums. Top right, is an empty box of Kodak Royal Pan (black and white) from 1961. Bottom center, 2 1/4" x 3 1/2" film holders that held two sheets of film, one on either side. (photo by Gary Nylander) 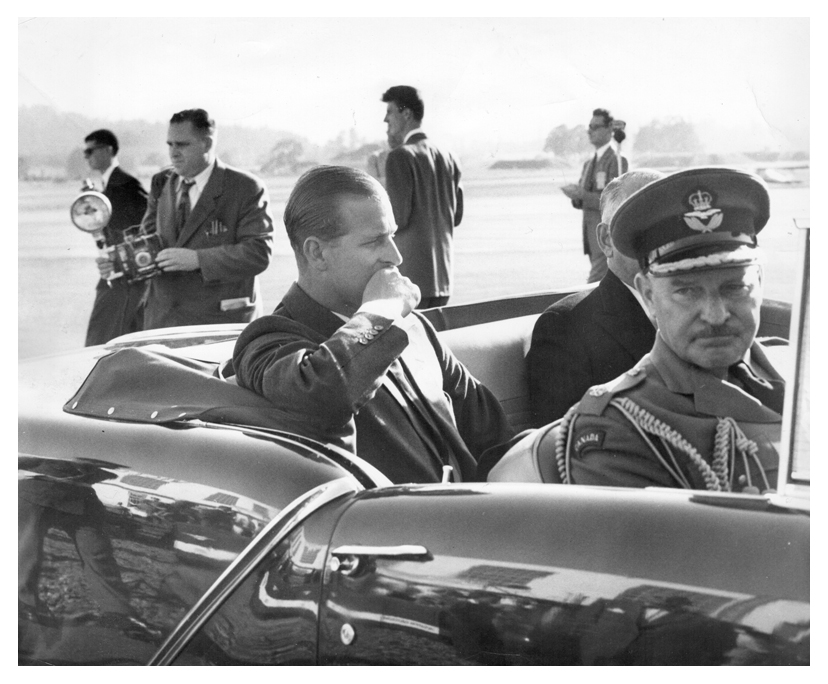 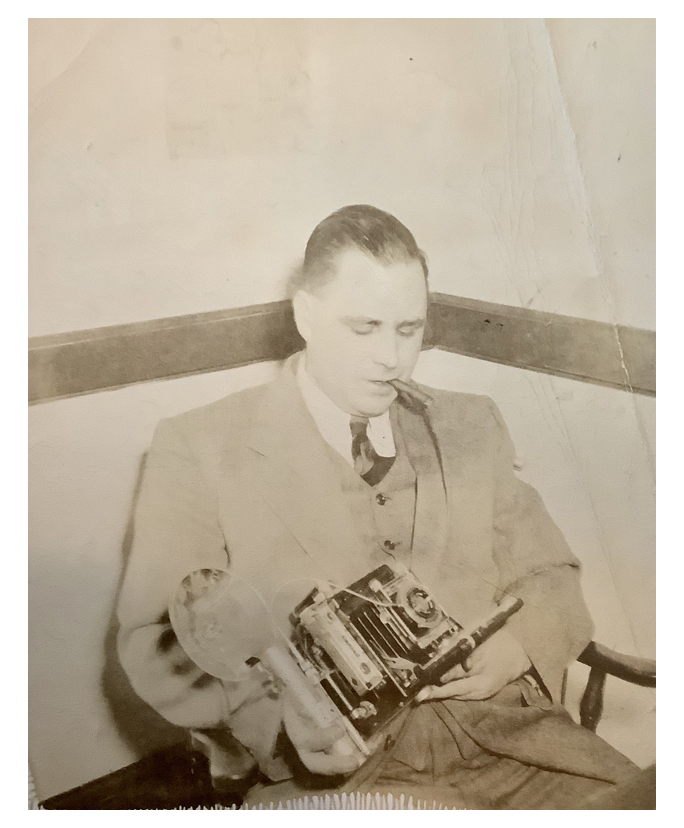 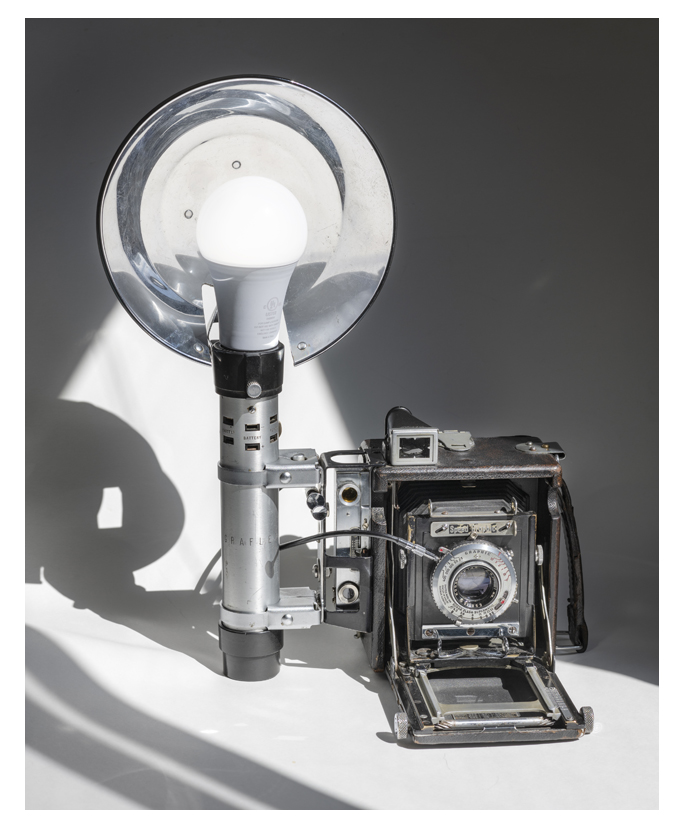 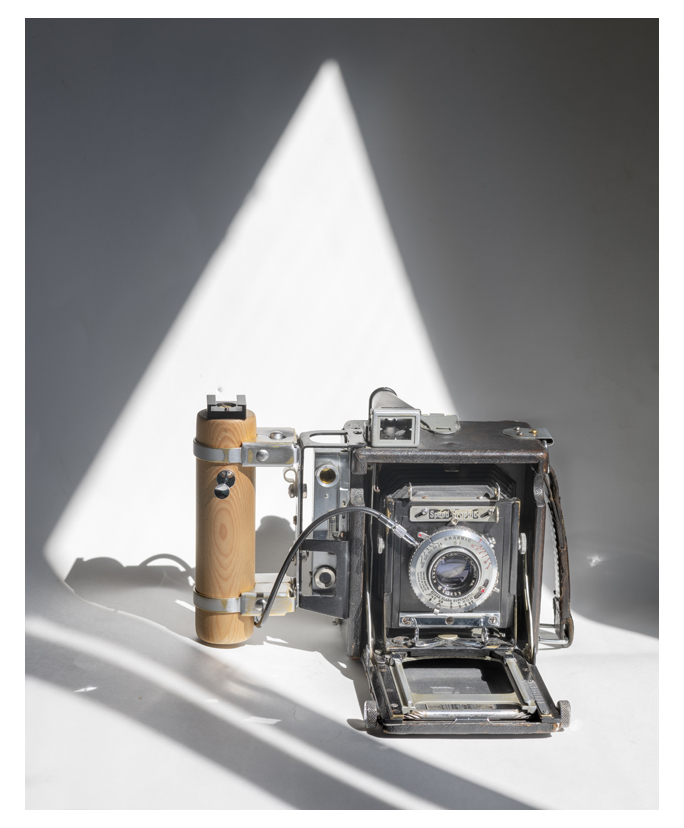 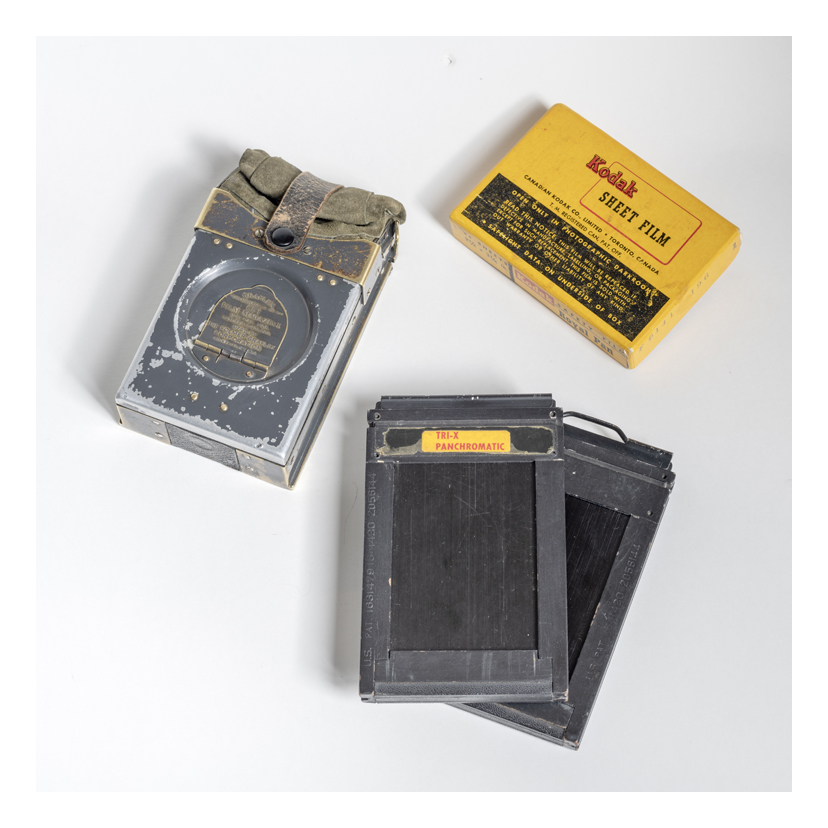 Posted by Gary Nylander at 3:31 PM No comments: 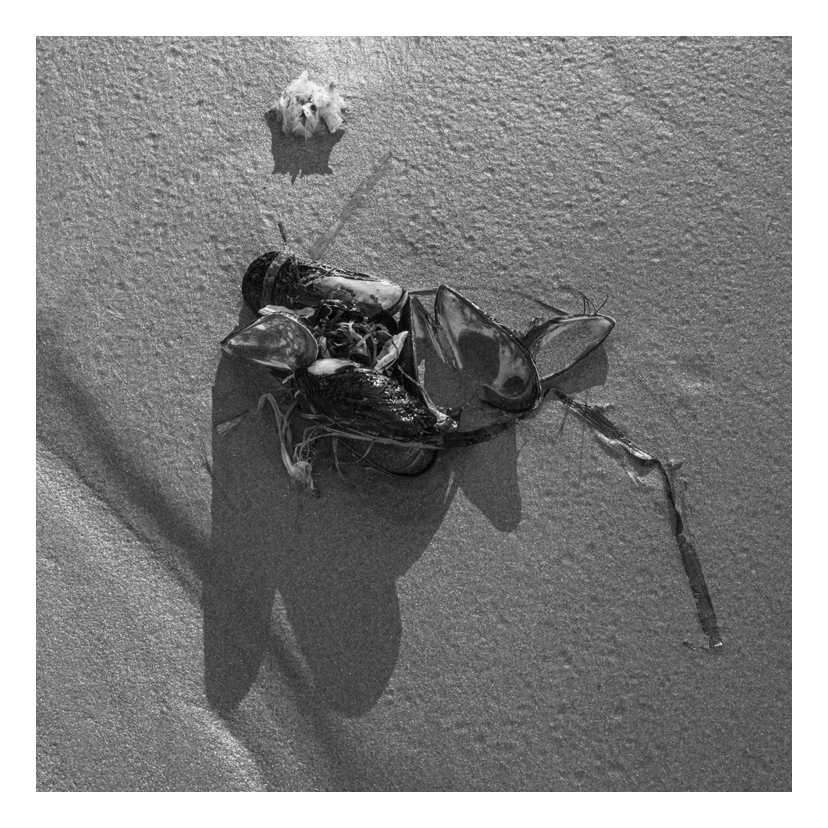 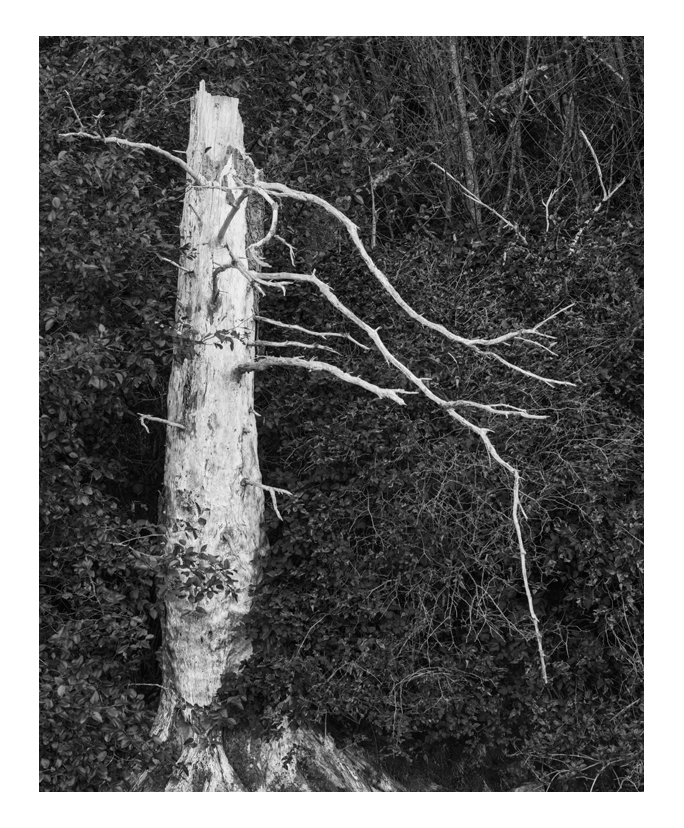 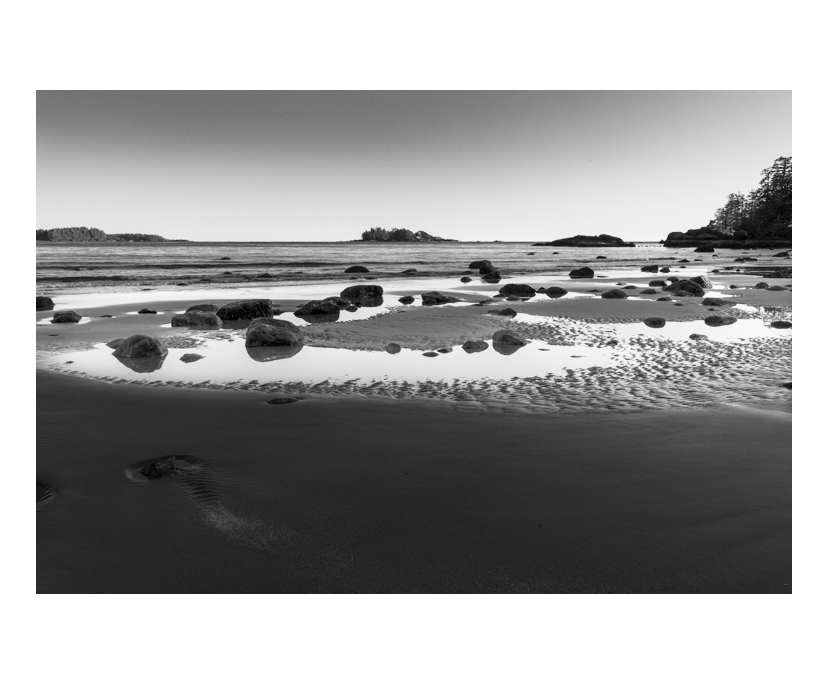 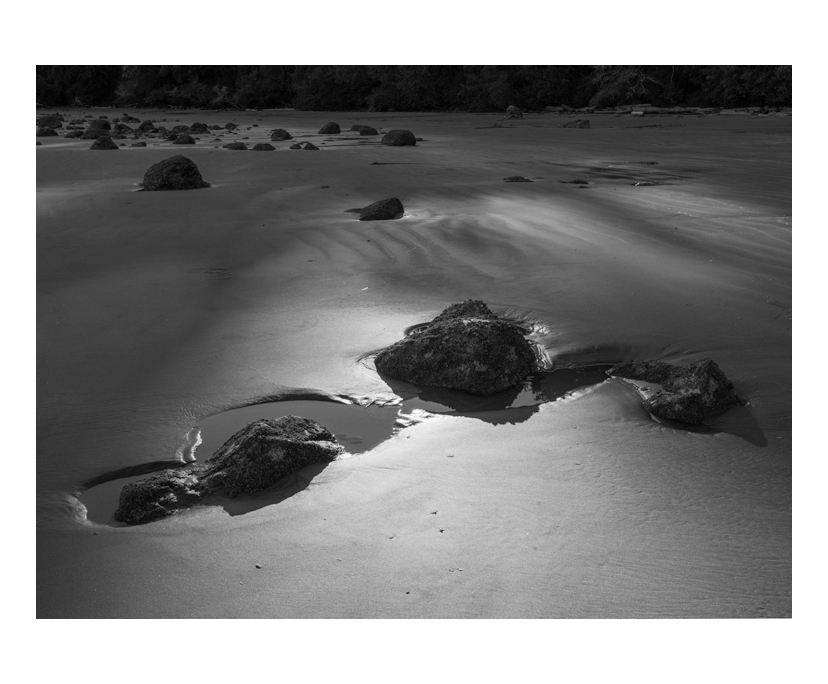