Its All about the Image 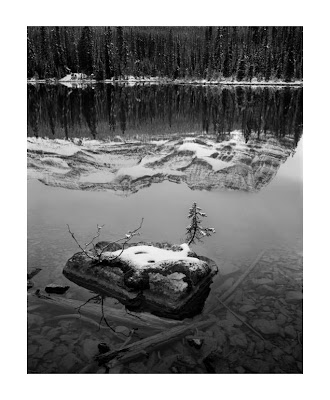 There is nothing like a discussion on the internet about the film vs digital debate, over at The Online Photographer, "HERE"and "HERE", a lively discussion is taking place about this subject. Personally I like to shoot with both, with digital the benefits are: no film to process, instant feed back of being able to look at an image seconds after you have made the image, a high number of images can be made, be able to chang the ISO on the fly given the lighting conditions, plus the image quality especially with the newer digital cameras is exceptionally good, and the price of digital is coming down while the quality is going up.

With film, there are some drawbacks: only a set number of images that can fit on the roll of film, usually up to 36 exposures with 35mm film, less with 120 size film, or 2 while using a large format sheet film holder, film basically has one ISO setting specified for the roll or sheet, although that can be changed, its more difficult with roll film. The lag time between making the image and waiting for the film to be developed can be long. Despite all that, I still don't mind shooting film, I quite enjoy pulling my freshly developed film out of wash to see "what I got".

There is a philosophical side to the whole debate too, with film there is the challenge to think things through a bit more carefully before clicking the shutter, I feel it helps me to evaluate the scene more closely as to what I am about to make a picture of. I tend to shoot less "random" images that I'm not sure why I made them in the first place. There is the association between the subject, what the photographer sees in his or her mind and the kind of instrument used to make that image, sometimes the inspiration is to use a film based camera or a digital camera.

I have shot with many digital cameras over the years, starting with the Nikon D1H, back in 2001, these days I shoot with a Nikon D300, the image quality its far better than anything I could have produced with a film camera. I also use the Fuji X10, a great little camera, I take it with just about everywhere.

I also enjoy using various film cameras from my old 35mm Leica III ( c. 1936 ) to my 4 x 5 view film camera often referred to as "large format" not because I think the view camera is better than digital, but because I find it's a unique and fun camera to use, I can't think of any digital equivalent, and its been around for so long historically, it always seem to have a few ardent followers ( like myself ), I find it very enjoyable looking and composing on the large rear focusing screen, its seems so simple and yet mystifying at the same time that this image just appears, abet upside down and backwards, in all its glory, its even more rewarding when I have found a beautiful image to capture.

Nice post Gary, and a very healthy attitude, seems to me! All best, Mike

Hello Gary,
Found your blog through TOP. We happen to be almost neighbour (Burnaby) and it looks like we are sharing very similar taste in b&W photography (www.lucbenacphoto.com).
BTW in 4x5 I am more into FP4 and HP5 in pyrocat, but I use TMY mostly in 120. Have you a developer of choice?
I am looking forward to your future posts.

Hi Luc,
Thanks for your post and your link. These days I mostly use HC-110 with T-Max 400, works well for me. I have also used Xtol, but prefer the simplicity of mixing up HC-110.
Gary

Congrats to the "Random Excellence", Gary!

Thanks very much Markus, I appreciate your support via your blog over the years.

Congratulation on the article in the latest View Camera (outside of the typo on your last name :-) )
Cheers,

Thanks for that. I still haven't seen my copy of View Camera, hopefully it will come soon.

Luc,
No sooner than I had posted that when my copy arrived today in my mail box, yes too bad about the typo, I am happy that they published my work.